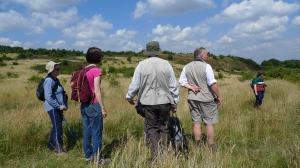 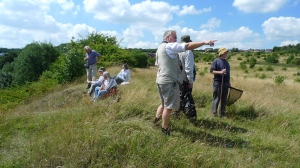 On Saturday SandNats (Sandwell Valley Naturalists’ Club) held a guided walk on the Rowley Hills, concentrating on wildflowers and invertebrates. The weather was perfect – warm and sunny – giving optimum conditions for spotting insects, and the walk was a great success, with several rare insect species being recorded.

The group walked a circuit around the old Blue Rock Quarry. Although the height of the flowering season has now passed for many plants, there were still quite a few in flower including Burnet-saxifrage (Pimpinella saxifraga), Hare’s-foot Clover (Trifolium arvense), Red Bartsia (Odontites verna), Lucerne (Medicago sativa) and others. There were plenty of butterflies around, including a few Marbled Whites (Melanargia galathea), by now looking somewhat worn. As well as these we saw Large, Small and Essex Skippers, Large and Small Whites, Small Copper, Gatekeeper, Meadow Brown, Common Blue, Comma and Red Admiral. 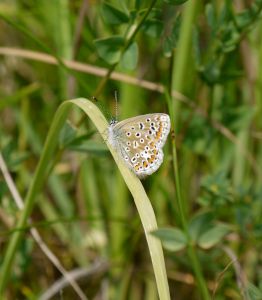 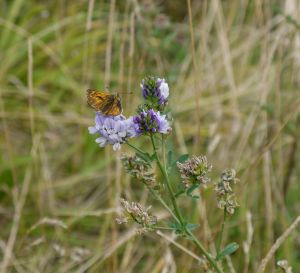 There was a noticeable passage of migrating Swifts heading south at one point, and quite a few House Martins feeding high overhead. We did particularly well for raptors, seeing Buzzard, Kestrel, Peregrine and Sparrowhawk. A pair of Ravens also flew overhead while we were looking around the Wildlife Trust’s viewpoint near the dolerite crags. Small songbirds were relatively quiet as expected for the time of year but we did see quite a few Goldfinches.

The highlight of the day was the discovery of a Six-belted Clearwing moth (Bembecia ichneumoniformis) on the Wildlife Trust’s Portway Hill reserve. This unusual moth mimics hoverfly species with its black and yellow stripes and clear wings, and is patchily distributed throughout parts of the southern half of Britain. It’s a great find for the Rowley Hills and also shows that the management the Wildlife Trust are carrying out on their land is contributing positively to biodiversity. 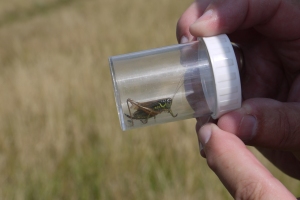 Another highlight was a Roesel’s Bush-cricket (Metrioptera roeselii), a medium-sized cricket which has been expanding its range north over the past few decades.

After a few hours of enjoyable wandering, sharing of knowledge and great wildlife sightings, it was time to head back home for a late lunch!

1 thought on “Report from SandNats walk”