On a fine and dry mid-September Saturday morning nineteen attendees assembled just inside the entrance to Bury Hill Park in anticipation of our Living Memory arranged ‘Looking Back’ guided walk across Portway Hill.

Our leaders for this event, Jim Rippin and Mike Poulton, took us on a circular tour of the Portway Hill site, stopping at pre-determined points to compare the scene that we were looking over today with Jim’s photographs taken in the 1950s when he was a lad. In many instances the view before us was totally unrecognizable from the photograph taken back then, because at the time, towards the end of the 1950s, deep granite quarries dominated the landscape. Names that were familiar to the local people of the day, Sampson, Old Sampson, New Turners Hill and Blue Rock Quarries have little meaning to the people living in this area today but back in the 19th century and first half of the 20th century many local people earned their living here in the quarries.

Jim showing members of the party one of his old photographs (image © Geoff Broadway).

To Jim these photographs transport him back to his childhood – this was his local playground, and fortunately for us today, back then he was the proud owner of a camera, somewhat unusual in those days especially for someone so young. Little could he have known then that the photographs he was taking at that time would be so significant today. He was among the very few people who photographed the local scene just as quarrying ceased for ever here in the 1950s. Resurrected, and digitised from photographs tucked away in boxes for most of his adult life, he has now compiled some of them into a pocket-sized book, perfect for carrying around, and a few of these books were handed out at the commencement of the walk so that the photographs could easily be referred to at the various stopping points as we walked across the hillside. A few photographs shown on the walk are exhibited here. To see more historical photographs of the area please visit the History page of our website.

A view of Edale Estate and Oldbury beyond taken from the top of Bury Hill Park in the 1950s (image © Jim Rippin). 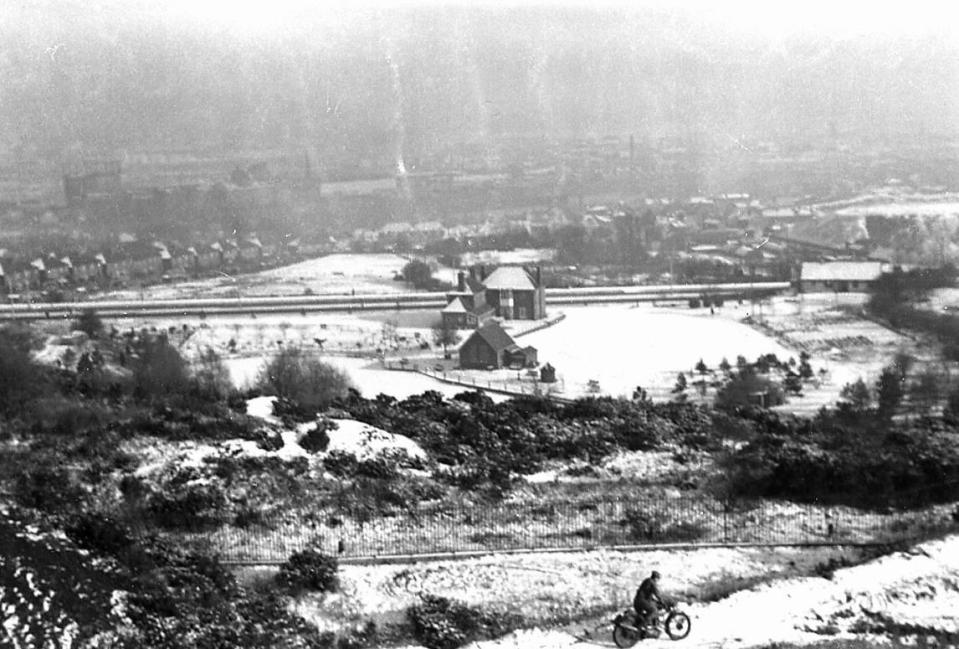 A view of Edale Estate and Oldbury beyond taken from the top of Bury Hill Park in the 1950s (image © Jim Rippin).

View towards the mast and water tower on Turner’s Hill in the 1950s (image © Jim Rippin).

One of the stops on the tour took us along the old double-hedgerow which was part of the disused public right of way which met Portway Hill a little to the north of Old Portway Farm. Here we were met by Wendy, the present owner of Old Portway Farm, who kindly invited us to look at the building in greater detail.

Working our way back towards the Wolverhampton Road down the south side of the hill Jim pointed out the location of Henley’s Farm and pig shed; this spot is now under housing along Kennford Close.

Our final stop of the day was around the brick-built cairn on the parcel of land owned by the Wildlife Trust where the event concluded with a group photograph.

Our grateful thanks go to Jim Rippin for his wonderful photographs, to Wendy at Old Portway Farmhouse for kindly inviting us on to her land, and to Geoff Broadway and his team at https://livingmemory.live for their generous support and for making this event happen.

We hope to repeat this walk again in the spring of 2019 so be sure to look out for the details on our website and book early.