Once again, our annual early morning bird watching walk led by local expert Nick Horton did not disappoint. Following an introductory talk, in which he informed us of what birds we should particularly be looking out for at this time of the year, we headed onto the hillside, taking the track leading through the old quarries excavated back in the 1700s which opens out onto the site of Blue Rock Quarry landfill. As we walked through the canyon, bird calls were evident, and we heard or saw in this area Chiffchaff, Blackbird, Woodpigeon, Song Thrush, Carrion Crow, Magpie, Great Tit, Blue Tit and Dunnock. Once out in the open, those who had them trained their binoculars on the dense patches of bramble and it wasn’t too long before Whitethroat and Lesser Whitethroat were spotted. It’s hard to believe that these tiny birds have in the past few weeks flown all the way from Africa to breed here, and in the next three months will raise their young and then both adults and juveniles will fly off to Africa to spend the winter in sunnier climes. Those that survive this mammoth journey will be back next year and the cycle will continue. Both species are relatively frequent up here on Portway Hill and Nick informed us that this was the best site he knew where both birds could reliably be seen at this time of the year.

Moving on further up the hillside in the direction of the masts, more birds were added to our ever-increasing list – Robin, Chaffinch, Goldfinch, Bullfinch, Chaffinch, Green Woodpecker, Coal Tit, Long-tailed Tit, Wren, a Peregrine, and possibly a fleeting glimpse of a Linnet as it flew off.

As we headed up towards the golf course, crossing Portway Hill, a Sparrowhawk flew quickly by. There was too much human activity on the golf course by this time so from here we turned back, crossed Portway Hill and returned along the track, skirting back gardens in Lye Cross Road where House Sparrow and Goldfinch were added to the list.

Our walk ended shortly after this and Nick was thanked for providing us with his expertise which always makes this early morning walk so much more rewarding. As he walked back home, he reported later that a Buzzard and a Heron had flown over.

The total of different birds either seen or heard in the three hours we were out was an impressive 27, showing just how important the open spaces of the Rowley Hills are for our wild birds.

Following on from our successful dawn chorus event last year, on Sunday May 7th we held our second annual Dawn Chorus walk on the Rowley Hills, once again led by local bird expert Nick Horton. Eleven attendees met at 7:00am at the cairn on Portway Hill in sunny, still weather conditions with a little chill in the air. We headed through the canyon to Bury Hill Park, across Portway Hill towards Turners Hill, and then down towards Warrens Hall Park, passing Warrens Hall Farm Riding School. In total we saw or heard 38 bird species.

Before setting off from the cairn Nick briefed us on which birds we should be particularly looking out for at this time of year and made us aware of some of his recent sightings on Portway Hill. Almost immediately, one that he had mentioned, our first Whitethroat of the day, and almost certainly a male, was seen launching itself skywards and then dropping down into a nearby patch of bramble in which there was probably a nest. Whitethroat is a summer visitor to our shores, arriving from Africa during April. The breeding habitat requirements of this bird are met with perfectly up here on Portway Hill, dense patches of scrub for nesting and an abundance of insects in the surrounding grassland on which to feed their young. Their numbers, Nick told us, are on the increase on this site, with many pairs noted in suitable habitat all over the hillside.

As we headed along the recently opened-up right-of-way through the old canyon leading out onto the top of Bury Hill Park we saw Long-tailed, Blue, Great Tit and Chiffchaff and a Blackcap was heard in the distance. High up above us, recently arrived House Martins and Swallows were a reminder of the summer yet to come.

After taking in the panoramic views towards Cannock, Barr Beacon and Birmingham city centre from the top of Bury Hill Park we set off in the direction of the masts on Turners Hill pausing briefly to count 13 Swifts soaring overhead. Stopping near the extensive patches of bramble and other rank vegetation about halfway up the hillside Nick pointed out where he had previously seen Lesser Whitethroat, and as if by order, one was spotted flying low over the bramble into a nearby hawthorn bush. With similar habitat requirements to Whitethroat the Lesser Whitethroat is much less common and more secretive and can be difficult to spot.

As we approached the upper regions of Portway Hill a Kestrel was hovering above the open grassland and provided a perfect photographic opportunity for those of us with a camera and telephoto lens. Nearby, from the top of the nearby hawthorn hedge, a Blackcap obligingly made its presence known.

As we neared the masts on Turners Hill, two of our larger raptors were noted; a Buzzard was soaring high overhead and a fleeting glimpse of a Peregrine was made by just a few of the group. A rabbit foraging in the nearby horse field was a first on this site for most of us. The morning sunshine had brought out the golfers so on this occasion the golf course was avoided and instead some of the party continued down Oakham Road towards the riding stable. By now the sun was high in the sky and it was becoming quite warm with butterflies becoming active. As we headed along the track which runs along the back of the stables and then descends, passing the fishing pond on the right, we noted Speckled Wood, Orange-tip and Green-veined White. Numerous Long-awned Moths, flitting about and alighting upon newly opened Wych Elm leaves were a pleasant distraction in the morning sunshine and a Holly Blue butterfly was yet another addition to our butterfly list. 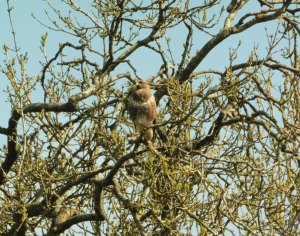 A small warbler noted in the hedgerow was confirmed by Nick as Garden Warbler after consulting his bird book to compare it with the very similar and much commoner Chiffchaff. Debatably, the most memorable sighting was probably our last of the day. There before us in a large Ash tree, whose leaves were not yet open, sat a Buzzard, totally oblivious of our presence. Through binoculars it was apparent just how large this bird is and how fortunate we are to have them here on the Rowley Hills in such good numbers. Our thanks once again go to Nick for leading us and for passing on his invaluable knowledge of the bird life of this area and we look forward to him leading another bird walk for us towards the end of the summer.

Don’t forget it’s our dawn chorus walk this Sunday (7th May), starting at 7:00am at the cairn on Portway Hill. Join local bird expert Nick Horton to look and listen out for the Rowley Hills’ resident birds such as Kestrel, Bullfinch, Long-tailed Tit, Mistle Thrush and Buzzard, as well as recently arrived migrants including Chiffchaff, Swallow, Blackcap, Whitethroat and maybe even a Lesser Whitethroat, Wheatear or Ring Ouzel. This event was very popular last year with some great bird sightings and we hope for similar successes this year! No need to book, just turn up; ensure you are dressed appropriately for the forecast weather conditions, and wear sturdy footwear. Bring binoculars if you have them! 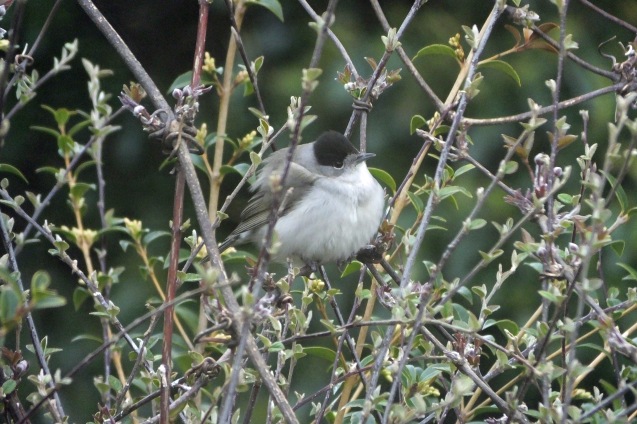